What is Roux-en-Y Gastric Bypass?

Roux-en-Y gastric bypass (RYGB), commonly called simply “gastric bypass”, is one of the most popularly performed bariatric procedures worldwide and has long been considered the “gold standard” of bariatric surgery. The gastric bypass was first reported in 1967 and was performed as open surgery for several decades. However, today, it is almost entirely performed by the laparoscopic (keyhole) approach.

It restricts the amount of food patients can have with each meal. It also changes how the food is metabolised. 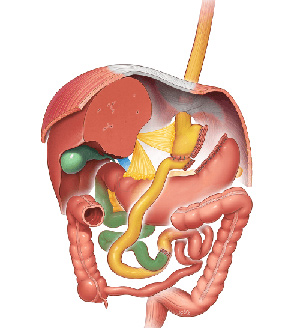 It is considered as a more invasive option when comparing with sleeve gastrectomy. However it offers better control for diabetes and relief of severe reflux symptoms. It is also a preferred option for people with previous gastric band who need to have revision surgeries.

What Happens During Roux-en-Y Gastric Bypass?

The operative procedure involves staple dividing the stomach into two chambers. The upper chamber receives food and is very small. The lower chamber is “bypassed” and does not receive food. The small intestine is divided and one end is connected (“anastomosed”) to the pouch. A second connection (“anastomosis”) is made to connect the disconnected stomach and duodenum to the small bowel. This connection enables the digestive fluids to meet the ingested food to enable nutrient breakdown and absorption.

After the procedure is completed, food advances directly from the small gastric pouch to the small intestine without passing through the lower portion of the stomach, duodenum and upper small bowel (jejunum).

How does Roux-en-Y Gastric Bypass work?

This gastric bypass is thought to help obese people lose weight in several different ways. The small pouch restricts the amount of food that can be eaten. The connection between the small bowel and the gastric pouch re-routes the transit of food directly into the small bowel. Since the food does not go through the bypassed portion of the stomach and duodenum there are metabolic and hormonal changes that lead to reduced appetite and an increased feeling of fullness.

Following bypass surgery patients can expect to lose around one third of their total body weight. The maximum effect on weight loss is normally observed during the first two years. There is typically some weight regain but most studies suggest that most patients will maintain a weight loss of around 25% beyond 10 years.

In addition to weight loss, several obesity related diseases will typically improve after surgery. These include type 2 diabetes, hypertension, dyslipidemia, metabolic syndrome, fatty liver disease, and obstructed sleep apnea. In fact, more than 50% of patients with type 2 diabetes will experience normalization of their blood sugar levels and will either be off all of their antidiabetic medications or require markedly less medications.